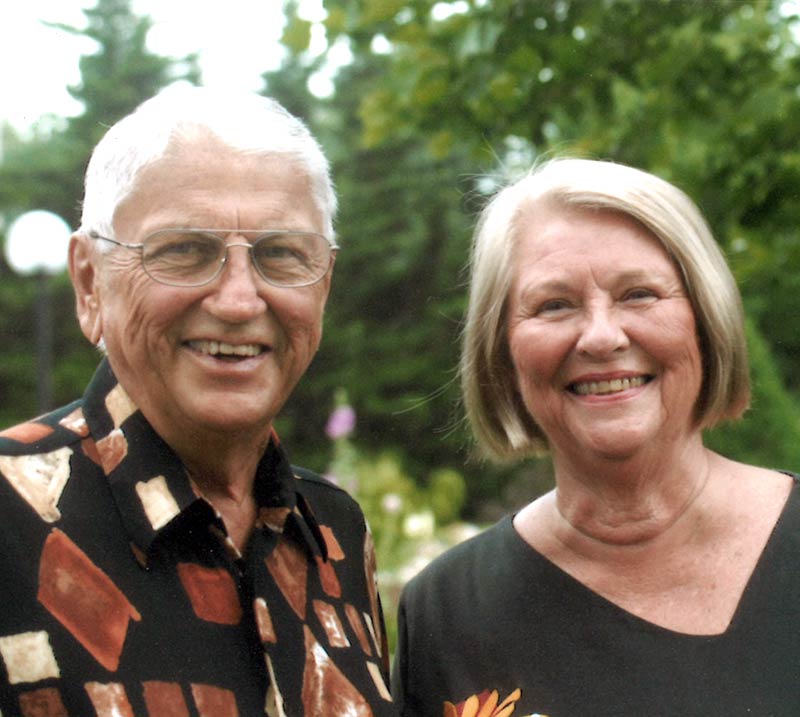 Ray and Jan Monteith built their family and business legacy in Warsaw, but that legacy almost never happened…all because Jan didn’t know how to dance.

Both Ray and Jan attended Macalester College in St. Paul, Minnesota.  At their first college social dance, Ray asked Jan to dance three times and each time Jan said, “No.” It wasn’t until their junior year when Ray took another chance and asked Jan to the movie, “Never on Sunday.” This time Jan said yes, and later revealed the real reason she declined his past dance requests; she didn’t know how to dance.

Ray worked hard putting himself through college. In the summers he graded roads. At Macalester, Ray shoveled snow, washed windows, and worked in the college’s cafeteria, witnessing what the cook put in the meatloaf, vowing never to eat meatloaf again. Ray also served his country in the Army Reserve.

Jan studied Biology, graduating with a career in Medical Technology. Ray graduated with a Business Degree with an interest in two job offers. Which job to accept was decisively made when; Jan’s mother sternly told Ray that “No daughter of mine is going to marry a Fuller Brush Salesman!” Therefore, Ray accepted the position with Firestone Tire & Rubber Company, quickly moving up the corporate ladder.

All three of their children, Kerri, Scott, and Julie were born in Minnesota. With each Firestone promotion came a family move, starting with Minneapolis then Duluth, Minnesota; Chicago; Akron, Ohio; and then to Indianapolis, Indiana. Ray’s demanding travel and work schedule caused him to rethink his priorities. As a couple, they made the decision for Ray to search several locations where he could start his own tire business. Ray chose Warsaw as the ideal location for his family and established Monteith Tire Company.

Ray’s energy came from his personal philosophy of “Driven By Winning Ways.” First and foremost were his faith in God and his personal relationship with Jesus Christ, and his endless passion for loving and providing for his family and serving others. When making major business decisions, Ray always consulted his wife for guidance. “Ray was creative and always full of ideas. His mind was always going. I was his sounding board,” Jan replied.

If Ray was the innovator and entrepreneur, then Jan was the organizer and hostess. Their daughter, Kerri, remembers her parents generously opening their home for church functions, community events, and parties. For many years, in celebration of the Christmas Season, Ray and Jan hosted a dinner in their home for their Monteith Tire employees and spouses.

As a family, the Monteith’s loved to travel, taking family vacations to Niagara Falls, California, Yellowstone, but their favorite destination ultimately became Puerto Vallarta, Mexico. “We loved the people. They were so friendly.” Jan said. They started vacationing in Puerto Vallarta in 1973, over the years, returning more than 25 times.

Ray passed away in 2007. His proudest legacy was the family he and Jan created together. Kerri became a special education teacher, mother, wife, and grandmother. Scott followed in his father’s footsteps, becoming an owner in a group of tire stores in Indianapolis. He’s a husband, father, and a Papa. Julie’s career was in advertising, taking her to Milwaukee, Dallas, and Chicago. After her father’s death, she felt the need to come back to her roots, Warsaw, Indiana. Julie passed away in 2016. She was lovingly known as the fun “Aunt Jules” by her nieces and nephews.

Young people energized Ray, encouraging many high school students that worked for him. Ray spoke to young people, on motivational topics such as “Winners Build on the Basics,” emphasizing that our beliefs and attitudes could either move us forward or hold us back.

Jan Monteith knew that she wanted to create something philanthropic as an expression of the values and beliefs she and Ray shared during nearly 54 years of marriage. Inspired by scholarship funds created by her children’s Sunday School teacher, Anabelle Gasaway and others, Jan decided creating a scholarship endowment with the Kosciusko County Community Foundation.

The Ray and Jan Monteith Scholarship Fund will provide financial assistance to Kosciusko High School graduates who are attending an Indiana College or University pursuing a career in social services, education, or human services. “There is such a need for social workers and for compassion.” Jan stated.

“Ray taught me to have more empathy, to help people, and to have a stronger belief in God.” Jan said. She also credits Ray with bringing spontaneity and fun into her life!

Thank you, Ray and Jan, for all you have done for Kosciusko County. And thank you for creating a permanent philanthropic legacy that will assist young people for many generations to come.