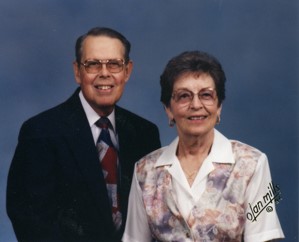 Most people in the Warsaw area are familiar with the Brennan name. The Brennan pharmacy was a fixture in Warsaw since Robert’s father Frank became the sole proprietor in 1948.

Robert and Susan Brennan met and married while they were at Manchester College. Robert graduated with a degree in music, and Susan with a degree in elementary education. Robert returned to higher education later in life and was 38 years old when he received his pharmacy degree from Butler University in Indianapolis.

Butler continued to be an important element in the Brennans’ lives: For 17 years, Robert taught there, and the couple divided their lives between Indianapolis and Warsaw. It was a busy life, Susan says — “it was fun, though.”

Susan taught school for a time and also wrote feature and spot news articles for the Indianapolis Star and the South Bend Tribune.

Along the way the Brennans had two children, a daughter and a son; and their son, Jim, followed his father into a career as a pharmacist. Jim now lives in California with his wife, Colleen, and two children. Their daughter, Patricia See, and her husband, Martin, live in Zionsville with their three children.

The couple traveled extensively, visiting Ireland, Canada and every state in the U.S., as well as taking several cruises. Susan also has been to the Panama Canal.

Their love of music led the Brennan family to start the local chapter of Up With People, called Sing Out Warsaw, with which they remained involved until Robert began teaching at Butler.

Susan credits Robert with being the most influential person in her life. Besides owning the pharmacy and teaching at Butler, he was on the Warsaw Plan Commission and was named Man of the Year and Young Man of the Year, among other awards and recognition. The couple had been married 48 years when Robert died in 1996.

Her advice to future generations is candid and to the point: “Get a good education. Laugh a lot.” After Robert’s death, she established, through the Kosciusko County Community Foundation, a scholarship in his memory (to which her name was added later) for pharmacy and music students — The Robert and Susan Brennan Scholarship.

Though she’s originally from Ohio, Susan considers Warsaw her hometown. “We came here in 1951 and I’ve lived here longer than anyplace else,” she explains. “I think we’ve had a wonderful life here.”