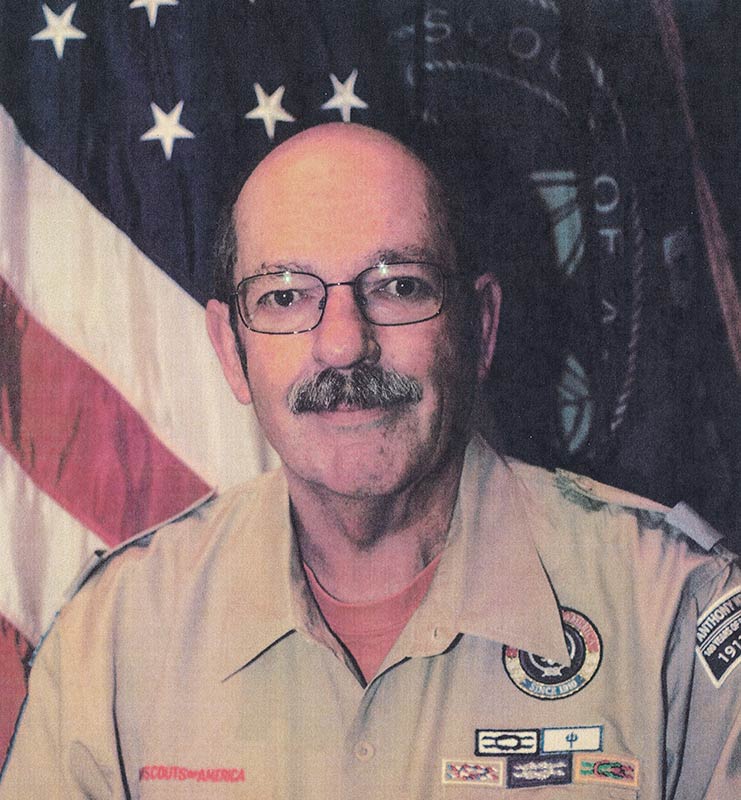 Jim Molebash’s story is one of great impact on the youth and adults of Kosciusko County, but it would not have been possible had it not been for the kindness of a stranger.

Jim grew up in Warsaw, Indiana. When he was 8 years old, a man came to his school and told the students all about the Cub Scouts. Jim was immediately enthusiastic and joined the local Cub Scout Pack. Jim advanced through the Cub Scouts into the Boy Scouts in Troop 819 sponsored by the Knights of Columbus of Warsaw. He achieved the rank of Eagle Scout in 1971.

During his time as a camp staff member at Camp Pioneer Trails, Jim’s friend Bob told him about professional Scouting. As he learned more about this potential career choice, Jim realized that the man who came to his school when he was 8-years-old was probably the local professional Scouter, the District Executive. An opportunity to job shadow a District Executive sealed the deal on Jim’s career choice. The professional Scouter he rode with that day advised him that Indiana Central College (now University of Indianapolis) offered a curriculum designed for individuals pursuing a career in Scouting.

As a student at Indiana Central College, Jim’s studies in the human relations program involved internship semesters each spring. While interning with the Anthony Wayne Boy Scout Council at the end of his junior year, Jim learned the Council was in need of an Assistant District Executive. “Being the brash young man that I was, I went in and told them that if they would pay me, I would stay on for the summer and be the Assistant District Executive,” Jim recalls. Jim started the paid internship before his senior year of college, and immediately after his graduation in the spring of 1976, he started as a full time employee with the Boy Scouts of the Anthony Wayne Area Council.

In the Scouting world, professionals are generally transferred to a district outside of the county they grew up in and only stay in each district for 4 to 5 years. Jim was in the Decatur district for a year and a half when he heard the Executive position in the Warsaw district was available. He asked if he could be transferred to have the position. The answer was yes, and Jim worked with this district for nearly 30 years and with the Anthony Wayne Area Council for 42 years all told, a phenomenon essentially unheard of in the Boy Scouts.

Through working with the Boy Scouts, Jim has had the opportunity to travel and visit many different areas of the country. He took a troop of Scouts to the Grand Teton National Park in Wyoming and attended training sessions in Florida. He also learned how to sail. One of the troop volunteers Jim worked with asked him if he wanted to go out in this sailboat with 3 other guys. That group of men has now been sailing together for 36 years. They sail the Great Lakes for two weeks each year.

While his position with the Boy Scouts has been the main focus of Jim’s life, he does have some favorite hobbies during his free moments. In addition to being outdoors and sailing, Jim enjoys fishing and being with family. He is also a member of the Warsaw Kiwanis Club.

Jim loves the Kosciusko community, which is why he was so persistent in staying in this district with the Scouts. “This community is just good,” Jim shared. “It reflects the values of Scouting, or rather, the Scouts here reflect the great values of the community.” The Scout Law states: A Scout is trustworthy, loyal, helpful, friendly, courteous, kind, obedient, cheerful, thrifty, brave, clean and reverent. “The best compliment I can give a person is to tell them, ‘You’re a good Scout.’ That means that they are upholding Scout law and living by the oath each Scout makes to honor their duty to God, country and others,” explained Jim.

From the man who came to his school when he was a boy sharing about the Cub Scouts, to the family that started the scholarship fund he received to pursue a college education, to the Scouting volunteers that believe in the values of the organization, there are many individuals that have made a lasting impact on Jim’s life. “I have not done anything that hasn’t been because of the kindness of others. I stand on broad shoulders,” Jim humbly shared. In honor of his retirement and long-time service with the organization, the Anthony Wayne Boy Scout Council established the Boy Scouts of America Jim Molebash Endowment Fund. Jim anticipates the growth of the endowment fund that will serve the youth of this district for generations to come. “The objective of this fund is to endow the District Executive position to ensure there’s always a professional Scouter here,” Jim stated. Each District Executive in the Boy Scouts of America serves more than 1,000 youth members and up to 500 adult volunteers. The endowment fund will help secure the local District Executive position to lead the Boy Scouts as positive force in Kosciusko County.