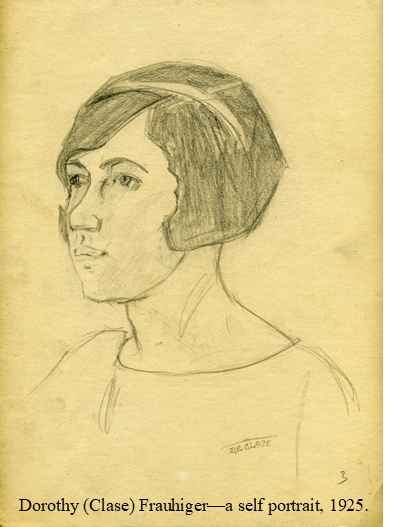 Dorothy Clase was born on June 16, 1906 in Warsaw, Indiana. She continued to live in Warsaw until she went to the John Heron School of Art in the 1920s. After art school, Dorothy returned to Warsaw and got a job with Bolinger Department Store, where she decorated their display windows.

Dorothy married Herman Frauhiger in September of 1928. Together, she and Herman had six children—two sons and four daughters.

Dorothy’s artistic gifts appeared in many different ways, according to her daughter, Donna Keough. Donna said her mother’s favorite mediums were pen and pencil and chalks. She said she remembers that her mother loved to use dark lavender in her sunsets; and Donna has fond memories of her mother creating illustrations to go along with the stories her grandmother told.

Dorothy’s artistic abilities were found in many parts of her life, right down to the unique and beautiful ways she wrapped gift packages.

Dorothy passed away in October of 1990. After her death, Dorothy’s daughter, Donna, created the fund in her mother’s memory—and other family members and friends have contributed to the fund over the years.

When asked why she chose a fund at the Community Foundation as a way to honor her mother, Donna said it just seemed like a fitting memorial.

Donna’s message to future generations is to “live the example you want to leave for others.” An example, no doubt, she learned from her mother, Dorothy Frauhiger.