Get to Know Our New Board Member: Steve Yeager 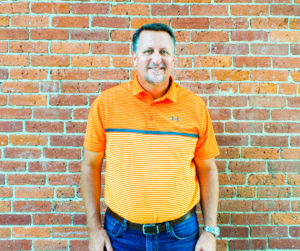 Steve Yeager grew up in Kosciusko County and, after settling here when his first child was born, dubbed this community “the best place in the world to raise a family.” One conversation with Steve and you will know that his family is truly what matters most to him. He refers to his as a “modern day Brady Bunch, plus one child, but minus Alice.”

After they both lost their first spouses to cancer, Steve and his wife Megan fell in love and formed a blended family, Megan with her two children, and Steve with his three. They also had two children together, for a total of seven children. Steve said it almost feels as though they actually have three sets of twins, since six of the children have another they are very close to in age.

Steve is a part owner of SYM Financial, the company which his father founded, and that he has been working at for the past twenty years. Previously, he was a pilot in the US Navy, flying a F14 Tomcat, the kind of jet featured in the 1986 blockbuster “Top Gun.” After two deployments and a lot of time spent in the Persian Gulf, Steve and his first wife, Tracey, moved permanently to Warsaw as they grew their family.

Of his decision to become a board member, Steve said it wasn’t so much a decision, but simply “if they’re interested, I’ll find time to give back.” Steve deeply values philanthropy, and has always felt that he ought to be a “good steward of [his] resources, not just [financially], but time.” With many worthy causes and wonderful organizations in the county, he has always wanted to respond to the need he sees around him by giving back to others out of the many ways he has been blessed. With the help of Megan, he has been fortunate to serve in a variety of capacities.

When he is not using his time to serve others at work or through philanthropic opportunities, Steve enjoys spending as much time with his family as possible. Much of this quality time over the years has looked like being involved in his children’s plethora of extracurricular actives, much of which has meant coaching their sports teams. With extra downtime recently in light of the pandemic, Steve has also found some time to dust off his guitar.

The Community Foundation is fortunate to have known Steve for many years and is grateful for his leadership and service as he begins his time as a Board Member!